We’ve recently come back from a weekend skiing with British friends. They ski regularly in France, as we used to, and skiing with them reminded me of things I’d forgotten. 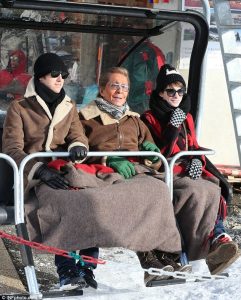 Riding a chairlift in style, with footrests and blankets. This one happens to have Anne Hathaway, her husband and a friend, in Switzerland.

Let’s take ski lifts. There are two parts to a ski lift. The first is the queue. In France, it’s an elbow event. French ski lift queues are all about the jostling and the inching forward. The strategy is to invade the space to the side of the person in front of you – ever so slightly – so that you can take advantage of any hesitations. You can tell from this description that the use of the word “queue” would fail the Advertising Industry Standards. This experience is definitely not queueing. There’s nothing orderly about the line.

Queueing in American ski resorts, on the other hand, is proper Queueing. Each lift has four approaches, which merge into two, and then one line for the lift. At each of the merge points, small groups of skiers (almost enough to fill one chair) alternate with the other mergers to make sure that everyone gets a fair turn. It’s the same courtesy that’s employed at 4-way Stops here. Meanwhile, there’s a “singles” queue for those people cruising alone to fill any empty seats on a chair. The process is soooo civilized. And efficient. And cordial. 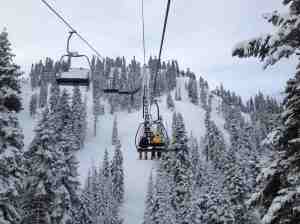 That’s a long, cold chairlift when you have no footrest or blanket

But then we need to consider the chair lift itself. In America, we haven’t seen many chair lifts that offer footrests, let alone plastic covers to protect skiers from snow, wind and even rain. Sometimes, dealing with the elements makes riding a chair lift nearly as tiring as the skiing! Whereas in Europe, not only are footrests and covers provided, but also blankets for legs and – in some cases – heated seats. It’s luxury.

So ski lifts are a draw.

Then we come on to general ambience in the resort. The restaurants are a good indicator of this. In America, everyone eats lunch at the same time, in the same place. There’s one venue that offers lunch on each large section of the mountain, and everyone herds into it. You wait in a line for your food and take it to your table. It’s a cafeteria experience. 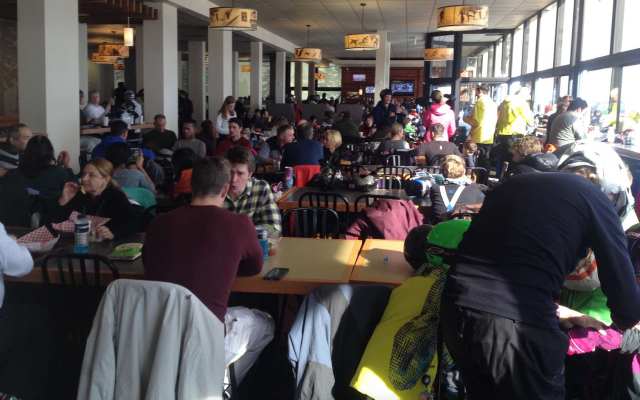 Whereas, in France, there are restaurants (note: they’re restaurants, not cafes) on every slope, and you can book a table. Waiters serve your meal, with wine if desired, and it can take hours if you want it to. The meal is as much an event as the skiing itself. Sign me up for lunch in European ski resorts! 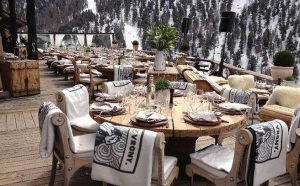 However, America wins hands-down in terms of safety. Last season (2015), over 100 people died skiing in the Alps. On this side of the Atlantic, just 11 people were killed in avalanches in the whole of America. There are various theories for this. One is that it’s really easy to access dangerous pistes in Europe. The second is that the weather was less predictable than usual (blame climate change). The third is that you can only ski pistes in America that have been bombed; if you ski out of bounds, you have your ski pass taken off you. Whatever the reason, America’s death rate is always lower than Europe’s.

This sounds like a slam-dunk for America. After all, surviving your skiing holiday is a jolly good plan. But it depends what you’re looking for. If you’re an off-piste skier, for goodness’ sake head to America. On the other hand, if you’re a fair-weather skier, unlikely to venture off-piste and die, you might prefer lunch in Europe.

1 Response to Skiing – America vs. Europe